The Committee is the outgrowth of an international cotton meeting held in Washington, DC, in 1939. At that time, world stocks of cotton had reached nearly 25 million bales, more than half of which were located in the United States. In September 1939, the following 10 producing countries convened in Washington, DC: Brazil, British cotton exporting colonies, Egypt, French cotton exporting colonies, India, Mexico, Peru, Sudan, the USSR, and the United States, to discuss problems of overproduction, rising stocks and falling prices. The principal objective was to take concerted international action to avoid chaotic developments in the world cotton economy.
Learn more...

Membership in the ICAC provides tangible benefits in the form of increased access to statistics and critical technical information provided by the Secretariat. Membership can lead to enhanced participation in collaborative interactions in cotton research and development. And, perhaps most importantly, membership provides the avenue for a country's government and cotton industry to join fully into the fraternity of cotton countries in discussions of cotton issues of international scope and significance.
The ICAC is an association of 26 members with an interest in cotton. The ICAC, formed in 1939, is the only inter­governmental body for cotton producing, consuming and trading countries. There are currently nine members of the Secretariat originating from eight different countries — Belarus, Colombia, France, Great Britain, India, Russia, Spain and USA — who work together from one office in Washington.
Learn more...

The ICAC plays a central role in the global promotion of cotton.

The Pink boll worm (PBW) is a worldwide pest of cotton. It is one of the three major species of cotton boll worms. It is one of the biggest threats to cotton production across the world. PBW is known to severely damage cotton up-to the extent of 60%. It has been causing severe crop losses to Bt-cotton in India and Pakistan in recent years. Studies confirmed that PBW developed high levels of resistance to Bt-cotton in India. Concerns of PBW resistance to Bt-cotton have also been raised in China recently. USA has been able to manage PBW through excellent eco-friendly approaches that are worth emulating.

PBW feeds inside fruiting parts and is therefore not amenable to pesticide exposure. The worms feed mainly on cotton but can also survive on Jute, Hibiscus and Okra. Moths are about 1 cm long and lay 200-400 eggs on flowers and bolls. Soon after hatching, the young larvae feed on ovaries of the buds and flower, or bore into tender green bolls. The larvae feed on developing seeds. Tender green bolls (10-20 days old) are most preferred.

2. Use of short-season cultivars coupled with enforcement of a closed season

3. Pheromone based monitoring and control methods

In Asia PBW occurs as a late season pest that mainly infests cotton during late winters. Short season cultivars that are harvested before the onset of winter, escape damage. The recent PBW problem in India has been traced to ‘extending the crop duration by an additional 60-90 days beyond the recommended 150-160 days’. The extended crop not only allowed extra generations of PBW survival, but also intensified selection pressure that lead to resistance development. Reverting back to short-season cultivars and

implementation of appropriate management strategies in India and Pakistan will play a vital role in minimizing the uncertainties and mitigating the impending risks in cotton production.

Cotton is considered as a ‘xerophyte’, meaning a plant that needs less water. Cotton is basically tolerant to drought and heat. The plants circumvent adverse weather due to their well-distributed root system and indeterminate growth habit. Based on the crop evapotranspiration ETc rates, water requirement of cotton crop was reported to be 2.0 mm per day (20,000 litres per hectare) during the vegetative stage and 6-8 mm per day during flowering and early green boll formation stage (critical window). Research reports show that cotton crop needs about 80-85% of the total water requirement during the critical window; and moisture stress during this time causes serious yield losses. Excessive water during vegetative and boll opening stages cause lower yields. Irrigation and rainfall data were obtained from 44 main cotton-growing countries and analysed by the ICAC to estimate water productivity. The following results were obtained:

2.    The global area under rain-fed cotton is 16.9 million hectares, which is equivalent to 55.7% of the total cotton acreage.

3.    Rain-fed area contributed to 10.22 million tonnes of lint, which is equivalent to 41.3% of the total global cotton production.

4.    About 21.42 million tonnes of lint, which is equivalent to 87.0% of the total global cotton was produced by using only 644 litres irrigation water per Kg lint.

Water productivity can be enhanced by water harvesting, irrigation with precision timing based on evapotranspiration measurements and optimizing the methods of water delivery through alternate furrows, or sprinklers or sub-surface drip irrigation. Soil and moisture conservation methods such as minimum tillage, mulching, cover crops or intercrops, efficient pest and weed management were reported to enhance yields, thereby greatly enhancing water use efficiency and water productivity.

Cotton lint yields across the globe range from 180 to 2600 kg/ha but yields are low in Africa at 180 to 550 kg/ha and India at 480 to 550 kg/ha. While the yields in Australia were higher than 1,500 kg/ha after 2001, four major cotton growing countries, namely, Mexico, Brazil, China and Turkey have been harvesting more than 1,500 kg/ha in recent years. While yields in these five countries and a few major Mediterranean countries have been increasing constantly over the past two to three decades, yields in Africa have been stagnant for more than 25 years. The world average yields were about 770 kg/ha after 2004. However, the world average yields (without India and Africa) were above 1,000 kg/ha over the past 10 years.

High yields in the subtropical region appear to be due to two major factors; 1) strategic breeding plans for the development of new varieties that are adaptive for the local climate and 2) scientific advances in agronomic management practices. The new varieties were of compact architecture, short duration (130-160 days), high harvest index and suitable for machine picking with a narrow critical window (flowering to green boll formation) of 40-60 days that is crucial for the management of water, nutrients and bollworms. Agronomic practices ensured proper availability of water, nutrients and solar radiation in addition to improvisation of integrated pest management. However, countries in the tropical region have been growing long-duration (160-210 days) varieties that are bushy and have low harvest index. Such varieties have a long (80-100 days) critical window of management that makes it difficult to obtain high yields without intensive input management and high costs.

India and Africa could emulate the ‘high yield’ success stories of Australia, Turkey, Brazil, China and Mexico by experimenting breeding strategies for the development of short-duration varieties with compact architecture and high harvest index, coupled with canopy management and better management practices to enhance ‘water use efficiency (WUE)’, ‘nutrient use efficiency (NUE) and pest management.

Organic agriculture is based on the principles of holistic farming. It embodies the philosophy of working in consonance with ecology and the environment to conserve biodiversity and to maintain ecological balance, thereby enhancing the sustainability of farm ecosystems and environment. The philosophy of organic cotton is based on the observation that insects and disease problems are an induced phenomenon known as ‘agricologenic’, due to several factors that are influenced by a chemical environment. Proponents of organic cotton believe that plants in conventional farms are physiologically unhealthy due to nutrient imbalance. Further, pesticides also disrupt the natural ecological balance by killing beneficial insects. Organic cotton farming is based on the concepts of habitat management and ecological engineering to ensure rejuvenation of soil health for the production of a healthy crop that is least vulnerable to insects, pests and diseases. Organic cotton forbids the use of genetically engineered seeds, chemical fertilisers, synthetic pesticides and chemical plant growth regulators. Organic cotton farms deploy cropping systems that support pest management and soil nutrient management. In contrast to conventional farms, organic cotton soils have more humus content, more organic carbon, and produce healthy plants. Organic cotton production systems are known to foster healthy soil, clean water and healthier farm ecosystems, thereby enhancing sustainability.

According to data available from the Textile Exchange, in 2016, the global share of organic cotton production was 0.4% and the area was 1%. In 2016, there were 8,303 organic certification centres and 50-60 brands that marketed organic cotton across the world. The global production of organic cotton increased from 24,000 tonnes in 2004 to 240,000 tonnes in 2009 but decreased to 108,000 metric tonnes in 2016. Although 18 countries produce organic cotton, only seven of them (India, China, Turkey, Kyrgyzstan, Tajikistan, USA and Tanzania) account for 97% of the total production. India has the largest share with 56% of the global production. Evidence from India, USA and Turkey shows that if backed by good science, high yields of more than 1,000 kg per hectare can be obtained. The current global average yields are low at 375 kg of lint/hectare. The yields may actually be higher, but the data could reflect low yields due to the fact that cotton is grown in only a portion of the farm, along with other plants in an organic farm, unlike the monoculture in conventional farms. The main challenges in organic cotton are inadequate seed availability, poor quality or insufficient access to organic inputs, labour intensiveness, weak scientific support, uncertain price premiums, low yields during the transition period (2-3 years), a tedious certification process, difficult traceability systems, and contamination possibilities due to coexistence of genetically engineered crops. To ensure progress, organic cotton farming needs good scientific support including breeding of robust varieties, creating efficient habitat management for each of the specific agro-eco regions, developing easier certification, inexpensive testing, reliable traceability techniques, and by providing risk mitigation for small-scale farms. 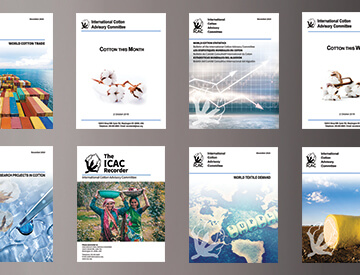 Reports, statistics and analysis from all sectors of the cotton value chain