ICAC’s Sources of Estimates on Cotton Supply and Use
By Armelle Gruère, ICAC

The Secretariat of the ICAC collects historical data on cotton supply and use by country, and formulates estimates and projections for the current and following seasons. The main statistics collected include harvested area, production, consumption, trade and stocks. Yields are generally estimated by dividing production by harvested area.

This article describes the main sources of information currently used for the ICAC Secretariat’s estimates of cotton production (including area), consumption, trade and stocks by country. The sources used by the Secretariat may change over time, and continuous efforts are made to improve and expand the pool of information.

As a general rule, the Secretariat of the ICAC adopts official national data when they are accessible and when they seem to be accurate. Otherwise, the Secretariat relies on secondary sources of information, such as the private sector, news providers, USDA Attaché reports, or statistics published by the Food and Agriculture Organization of the United Nations (FAO). When the lag between the event (production, consumption, etc.) and official reporting of estimates is too long, the Secretariat temporarily relies on secondary sources until official data become available. The ICAC Secretariat always collects additional qualitative information to supplement the hard data and improve its understanding of the cotton market in specific regions.

Adjustments and/or conversions of the raw data collected by the Secretariat are often necessary before entering them into the ICAC database, and making them comparable.

•    Second, production data in some regions are published for seedcotton, not lint. This is the case for most African countries, as well as some South American and Central Asian countries. In these situations, the Secretariat estimates lint production by multiplying the quantity of seedcotton by a ginning outturn ratio specific to that country.

•    Fourth, stock data, when available, often need to be adjusted in order to account for all types of storage, including cotton in the hands of producers, ginners, spinners, cotton in warehouses or in the transportation system, and cotton in ports.

For each producing country, the Secretariat collects data on total annual cotton area and production. It also collects data for the different sub-regions, when these are available. The major sources for estimates of cotton production are described in Figure 1. 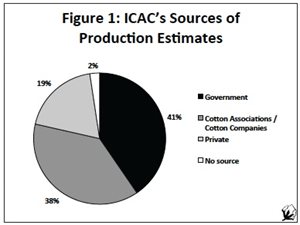 •    Sources: The main sources of data for production, as shown in Figure 1, include government agencies and cotton organizations/companies. Another important source of information, often used to complement data received from official sources, or adopted when no official data are available, is the private sector. Sources within the private sector include companies servicing the cotton industry (such as trading companies, ginners, spinners, and controllers), as well as news providers (such as Cotton Outlook, Cotton International and other specialized magazines). In some cases, the ICAC Secretariat uses estimates of production published by the FAO.

•    Accessibility: The ICAC Secretariat accesses area and production estimates through two major channels: 1) via reports published on the Internet, and 2) via e-mail exchanges. Other means include phone, face-to-face meeting, and fax. International and regional cotton meetings often give the possibility of gathering data from countries with which communication is difficult.
Table 1 indicates that for all five of the largest producing countries (China, India, United States, Brazil and Pakistan), which produced over 1 million tons of cotton each in 2010/11, and which jointly account for 79% of global estimated production in 2010/11, statistics on cotton production are readily available from government sources, with easy electronic access to information.  India and Pakistan dot not update the official production estimates every month but several times during the season. However, both countries report seedcotton arrivals at regular intervals during the season.

Amongst the next 13 largest producing countries (output ranging from 100,000 tons to 1 million tons in 2010/11), only five (Uzbekistan, Australia, Argentina, Mexico and Egypt) regularly publish reports containing cotton production statistics2. For five other countries (Turkey, Greece, Burkina Faso, Zimbabwe and Mali), the ICAC receives information from its coordinating agencies on request (via e-mail or phone). For the remaining three countries (Turkmenistan, Myanmar and Syria), very little information is available, and the ICAC Secretariat has to rely on secondary sources to estimate cotton area and production.

Amongst the next 24 largest producing countries (output ranging from 10,000 tons to 100,000 tons), 17 countries provide cotton production statistics regularly, either through electronic reports or on request. However, for seven countries (Tajikistan, Nigeria, Kazakhstan, Afghanistan, Ethiopia, Kyrgyzstan and Azerbaijan), very little information is available, and the Secretariat has to rely on secondary sources to estimate cotton area and production.
Table 1 highlights the fact that for a number of countries, there are no reliable sources of information on production. In particular, reliable estimates of area and production for Central Asian countries are difficult to obtain.

Amongst the 42 countries producing over 10,000 tons of cotton in 2010/11 and listed in Table 1, 29 are members of the ICAC. Most of these ICAC members, but not all (25 out of 29) regularly provide the Secretariat with statistics on cotton production.

Finally, what Table 1 does not show is that in some countries, official production statistics are not fully accepted as accurate and are the object of debate within the cotton sector. In these situations, the ICAC Secretariat gathers as much information as possible before deciding which estimate to adopt.

Cotton use is more difficult to estimate than production. While cotton production takes place once a year in most countries, consumption takes place throughout the year.  Cotton can be bought and stored for a number of months before being used, or can be sold back to the market. In large consuming countries, cotton use is distributed amongst many spinning mills, ranging from very small units to very large units, making data collection difficult. Some cotton is consumed outside of spinning mills, for example on farms. In addition, since cotton is an input to the industrial spinning process, its consumption is less frequently measured than the output: 100% cotton yarn or blended yarn (cotton mixed with other fibers, either synthetic or natural). Finally, data on cotton use or cotton yarn production are usually collected by government agencies different from the ones tracking cotton production. Because of these particularities, it is often necessary to collect not only one type of data (for example cotton yarn production) but several types (yarn production, fabric production, cotton trade data, and qualitative reports) in order to estimate cotton consumption in a given country. 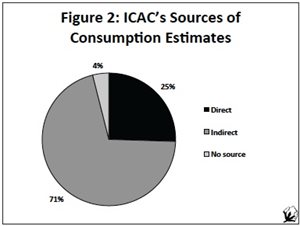 1.  In a few countries, government agencies estimate annual and/or monthly cotton consumption (for example the United States, South Africa, India, Pakistan, Brazil, etc.). The Secretariat adopts these estimates when they seem accurate and make sense in relation to the other elements of the country’s balance sheet.

2.  In many countries, cotton consumption is not estimated. In these cases, the Secretariat collects data on cotton trade and/or cotton yarn production to develop estimates of cotton consumption.  These data are usually available monthly.

o     When a country does not produce cotton, the Secretariat assumes that net cotton imports by this country are roughly equal to consumption (despite a lag of sometimes several months between imports and consumption). Data on cotton yarn production and anecdotal reports from the private sector can strengthen these estimates.

o     When a country does produce cotton, the Secretariat estimates consumption by deduction from the other elements in the balance sheet (production, imports, exports, stocks), if they are known.

In these two situations, the Secretariat has to make assumptions regarding beginning and ending stocks in the country. Often, it assumes that the stocks-to-use ratio remains stable from one season to another.

For some countries, such as China, measuring the amount of cotton used every year is made more difficult by the fact that the official cotton production and cotton yarn production estimates are both the object of debate. The Secretariat estimates cotton consumption in China as the last element in the balance sheet, after adopting estimates of production and ending stocks, and supplementing its analysis with qualitative reports.

Cotton trade data are tracked by customs services throughout the world. The Secretariat of the ICAC employs several means to collect these data:

•    Some ICAC members send monthly or annual cotton export and import estimates directly to the ICAC Secretariat, which saves time and efforts, and also minimizes the risk of error by the Secretariat.

•    For other countries, the ICAC collects trade data from customs services, when these data are available. Many countries now publish these data on the Internet3.

•    For some countries, the ICAC cannot access trade data and has to rely on secondary sources.

Unfortunately, the ICAC does not have at this time the financial means to buy customs trade data from Global Trade Information Services, Inc. (GTI).

The ICAC Secretariat estimates beginning stocks and ending stocks for each season and each country in its database of cotton supply and use (as of July 31/August 1). Stocks are a vital part of a country’s cotton balance sheet, as their estimate helps to assess how much cotton is available relative to use (mill use or exports). Once aggregated amongst countries, the estimate of global stocks is useful to calculate the global stocks-to-use ratio, which itself is an essential tool to evaluate the tightness of stocks relative to use in the world. Movements in the global stocks-to-use ratio, when estimated correctly, can bring understanding in movements of international cotton prices. Stock estimates at the country level can help to improve forecasts of cotton consumption and trade by country.

Unfortunately, cotton stock estimates are underrated. Only a few countries estimate their cotton stocks at a given time in the year and publish this information or make it available to the ICAC. This means that the Secretariat of the ICAC has little information to estimate stocks. As a result, most estimates of ending stocks are currently calculated as a residual in the balance sheet, i.e. with the following formula:

This method is not satisfactory, as it means that a mistake in estimating beginning stocks at a given time is passed on for many years until new information becomes available. It also means that any error in estimating the other elements of the balance sheet (such as production and consumption) will be reflected in the estimate of ending stocks. Apart from the official estimates of stocks that are published by a few governments, the Secretariat has to rely on anecdotal reports from the private sector in order to estimate stocks.

It is urgent that more efforts be devoted by governments in the estimation of cotton stocks, as these efforts will improve the quality of the ICAC’s database on cotton supply and use, and therefore its analysis of the cotton market and its price forecasts.

The quality of the data collected by the Secretariat of the ICAC determines the quality of the ICAC database on cotton supply and use and its subsequent analyses. In particular, the ICAC price forecasts are developed with a model that is based on the ICAC database of supply and use. It is therefore important that the ICAC‘s country members regularly provide to the organization quality data on production, consumption, trade and stocks. This article emphasizes in particular the need for governments to make additional efforts to estimate their own cotton stocks, and to make this information public. Ideally, it would be desirable that data provided to the ICAC be expressed in the metric system, to avoid conversion errors.